Are you looking for hidden beaches in San Francisco for a local’s only experience? Then you’ve reached the right post where I spill the beans on two lesser known beaches which are kind of a local’s secret. These secret beaches of San Francisco provide beautiful views of the Golden Gate Bridge and are perfect for a witnessing an ethereal sunset in the city, minus the crowds! 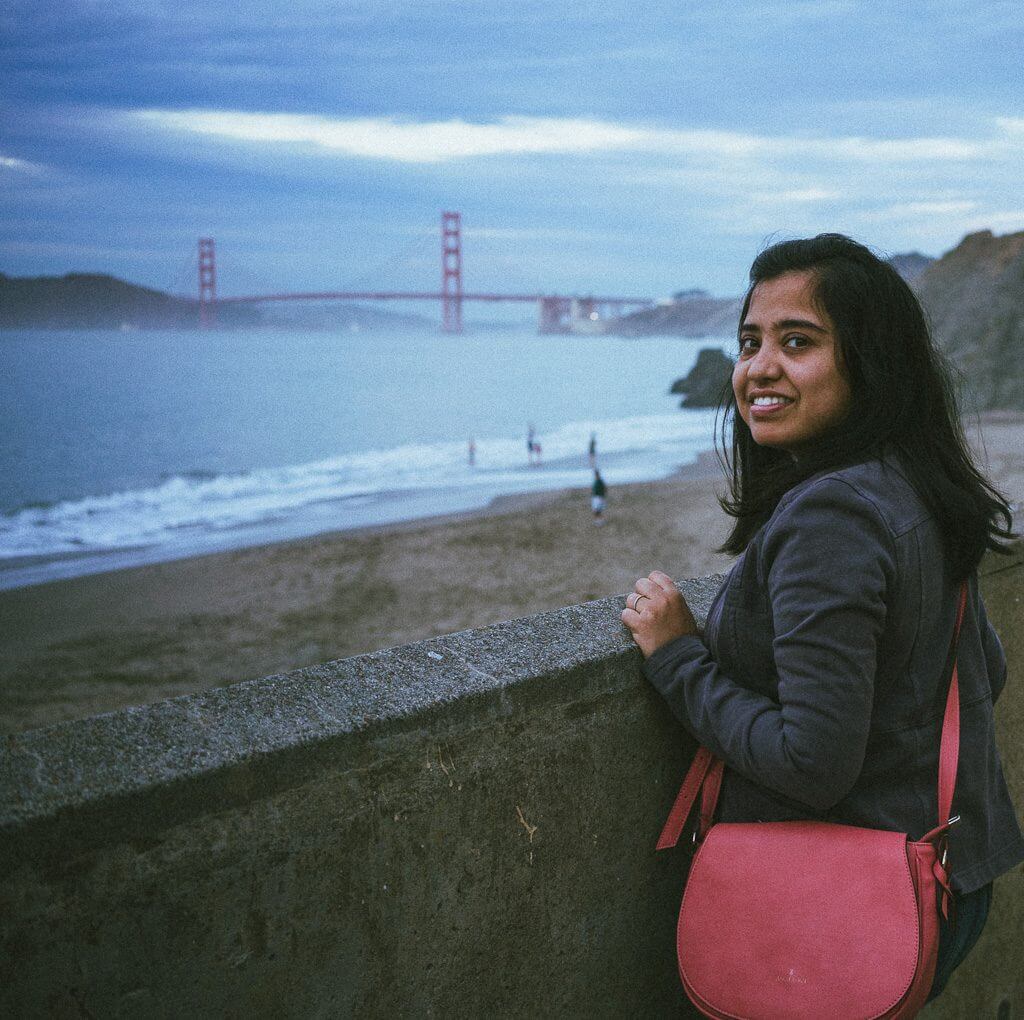 WHERE CAN YOU FIND HIDDEN BEACHES IN SAN FRANCISCO?

San Francisco may be a tiny city but is filled with local secrets, under the radar spots and of course, hidden beaches. Being a San Francisco resident, I have combed several of these lesser known beaches in the city in search of secluded spots to witness a tranquil sunset.

Here are my recommendations for two super special, relatively unknown and locals favorite, secret beaches in the city which double up as the best San Francisco sunset spots.  These two are also easily some of the best beaches in California due to their golden-pink sand and gorgeous views of the Golden Gate bridge in the distance.

Remember, San Francisco beaches are chilly and windy and you need to be dressed appropriately to counter all these crazy microclimates in our tiny city! Also, please be respectively of these public spaces and do not take anything with you from the beach, such as sand, shells or stones! 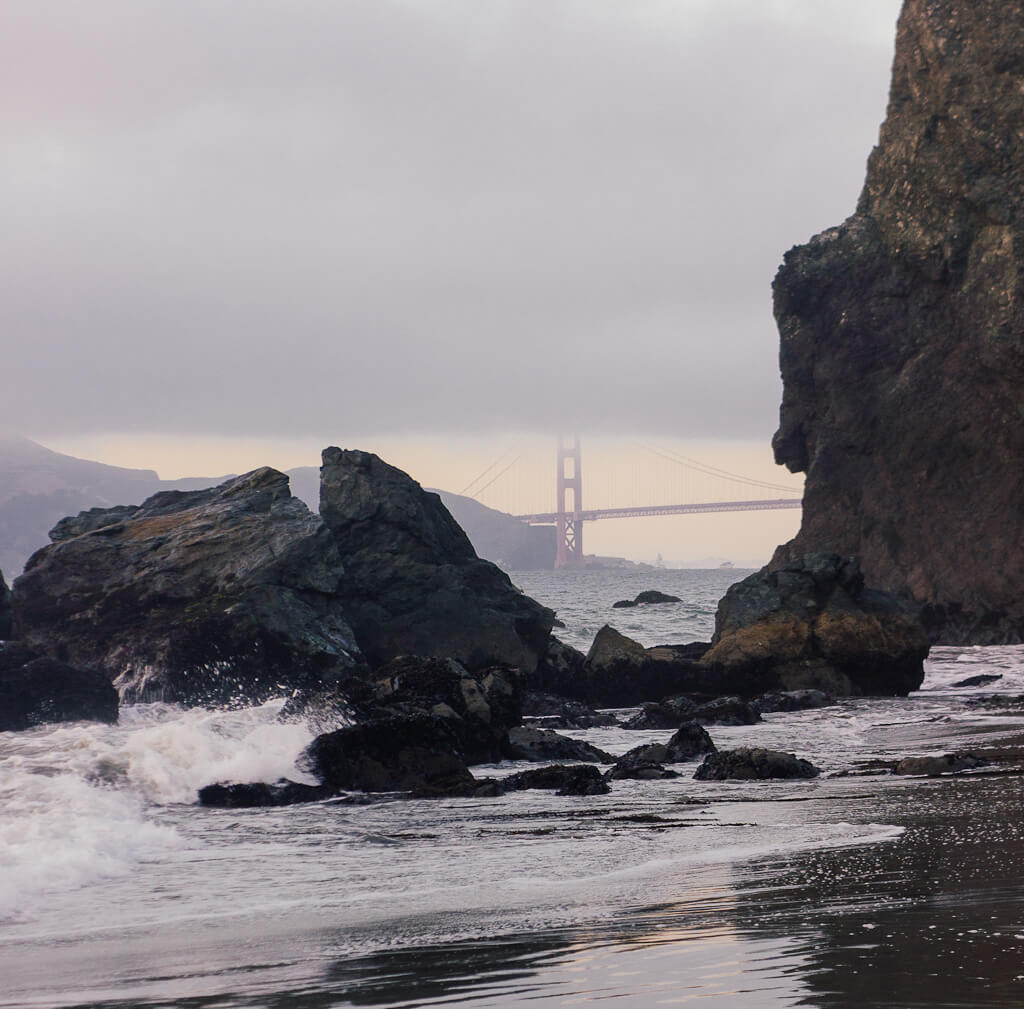 Mile Rock beach, a small rocky beach (more like a cove) jutting out into the Pacific ocean, overlooks the Golden Gate bridge in one corner of the Land’s end coastal trail in one of the most beautiful neighborhoods of San Francisco. This is one of the best beaches in Bay Area and is also one of the best spots to watch a sunset in San Francisco.

All you need is a good jacket (does get windy and chilly), a camera + tripod (if you are a photography nerd) and the will to climb down and up a few hundred flight of stairs to witness the best San Francisco sunset! Best of all,this is a dog friendly beach in San Francisco! 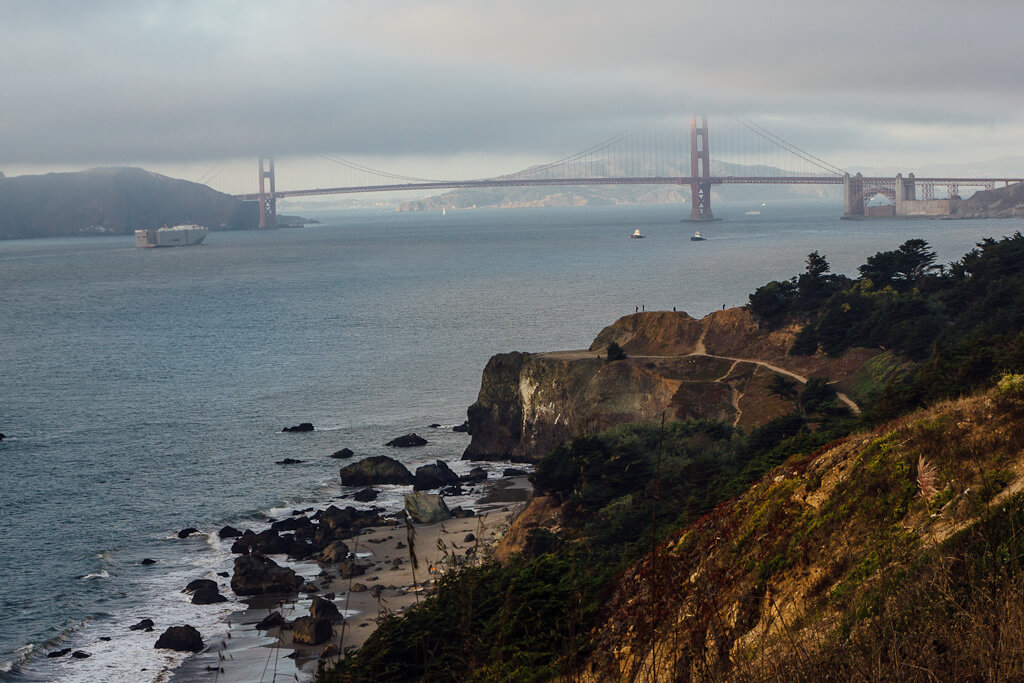 HOW TO GET TO MILE ROCK BEACH

Getting to this secluded beach in San Francisco is pretty easy and you can either drive to or take the Bus 38 to Land’s end, specifically park at or start from El Camino del Mar and Point Lobos Avenue, just up the hill from the Cliff House and the Sutro Bath ruins, which is the trailhead.

Then start your journey along the coastal trail which is easily one of the best hikes in San Francisco. This trail follows the steam railroad route established by Adolph Sutro (owner of the Sutro Bath house, the ruins of which still persist at Land’s End) to bring in people from downtown San Francisco to enjoy the bath house. Steam train later gave way to electric cars but the route was constantly plagued by landslides and finally after the torrential rains of 1925, where huge portions of the route caved into the ocean, these tracks were deemed too costly for repair and abandoned.

The trail also has several curved rest areas where you can sit and enjoy a beautiful view of the ocean and listen to the fog-horns. 0.6 miles of hiking along the trail will lead you to a sign for the beach towards the left. What follows after that is several flights of sandy steps (there are quite a few of them) as you descend into the rocky, sandy cove providing a spectacular view of the Golden Gate bridge.

Best of all, since very few people know of this under the radar beach, you will be witnessing a beautiful San Francisco sunset with only a few people around! Another attraction is a cylindrical object jutting out of water that used to be a once functioning lighthouse, named the Mile Rock beach lighthouse. Its defunct now and there is an automated light to guide the ships. If it’s not too foggy you might also catch the flashing lights of Point Bonita lighthouse in Marin headlands (Sausalito), one of the remaining active lighthouses in California.

Just above Mile Rock beach, is the famous Lands End labyrinth, one of the best offbeat photo spots in San Francisco.  It is also a dog friendly attraction, but please be mindful while visiting and do not dislodge any of the rocks in the circles. 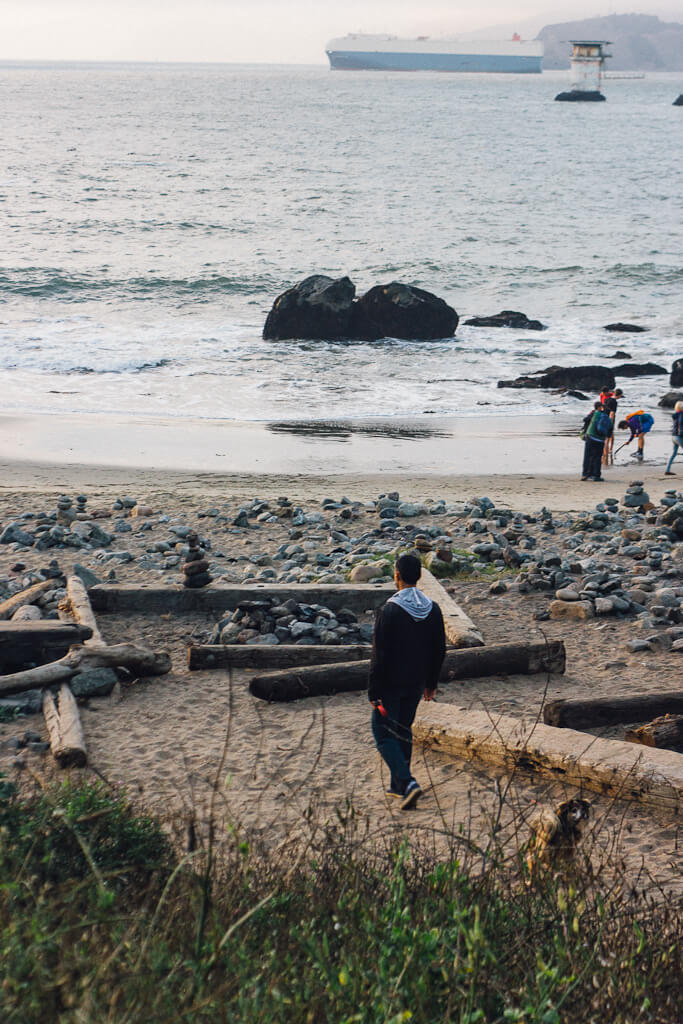 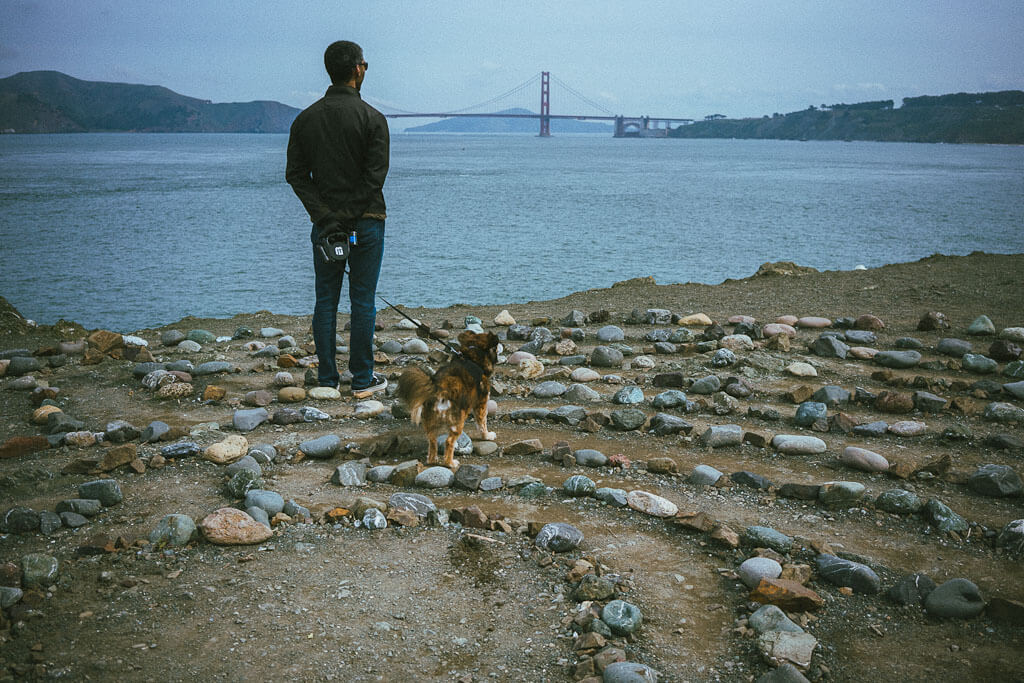 It is essentially a small cove in the  San Francisco’s Sea Cliff neighborhood and lies between Baker beach and Land’s End, overlooking Marin Headlands. The name comes from it’s past as a camp for Chinese fishermen. In case you are interested in public transportation, San Francisco’s MUNI has you covered.

Board the Bus # 38 (which also takes you to Land’s End) and hop off at Geary Blvd and 30th Avenue in Outer Richmond, after which a brisk 15 minute walking will take you to this hidden beach in San Francisco. Enjoy a beautiful (albeit chilly and windy)  San Francisco sunset with another breathtaking view of the Golden Gate Bridge in the horizon. 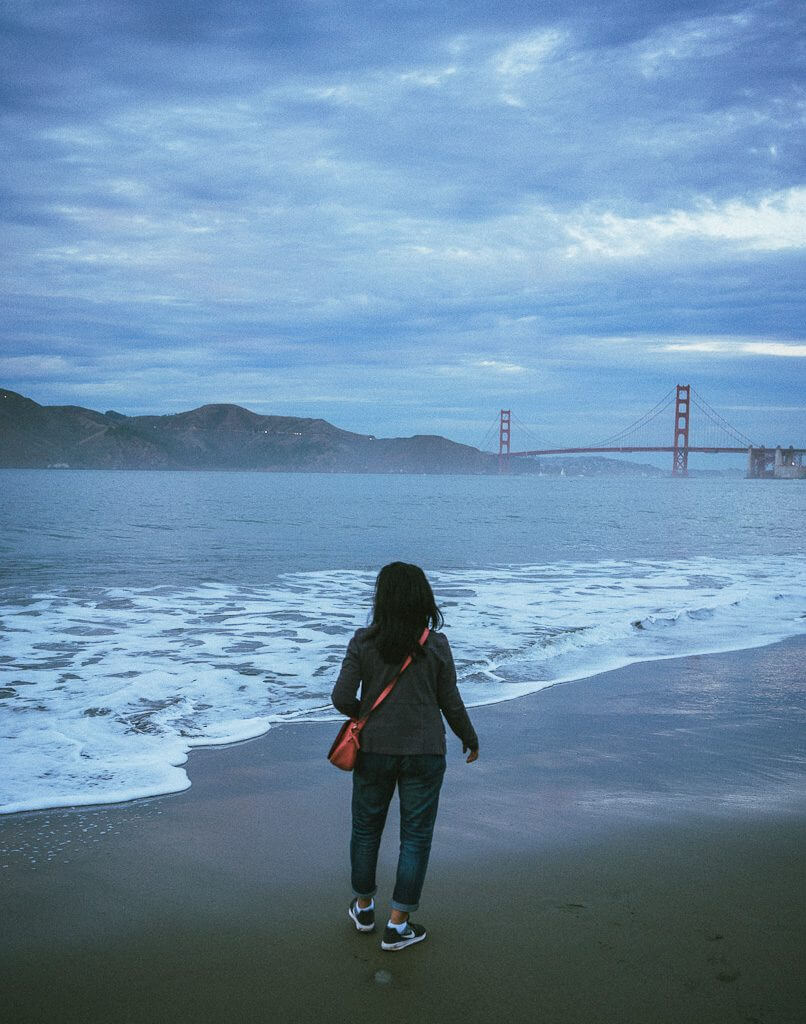 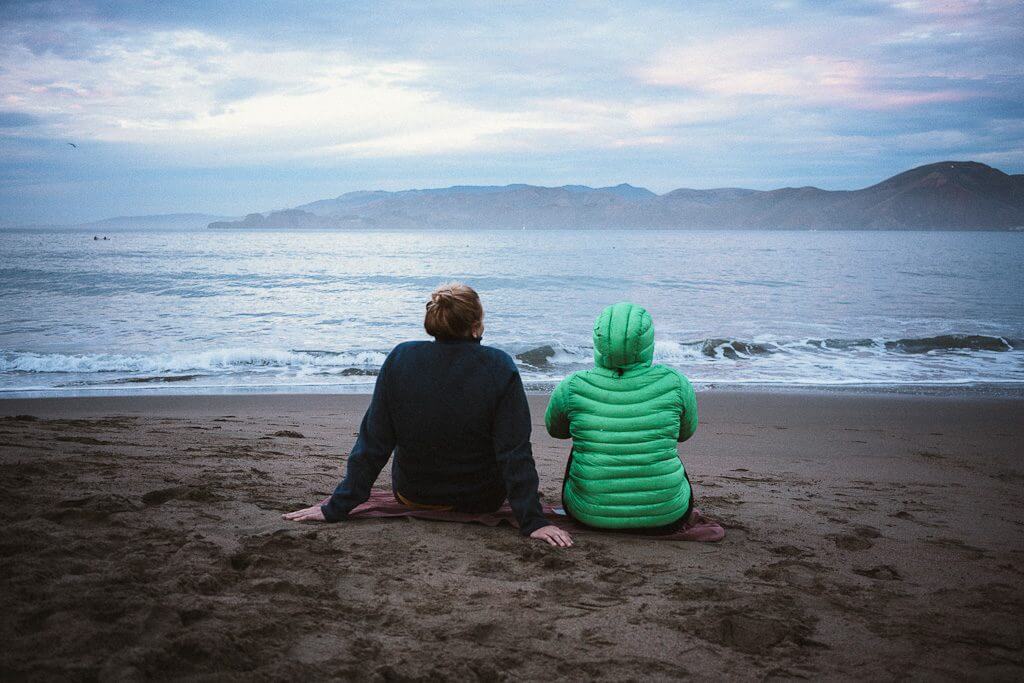 I hope you enjoyed reading this post on two hidden beaches in San Francisco from where you can catch spectacular sunsets. Read my other San Francisco posts right here for more insider information and local guides that only a resident can provide. Thanks so much for stopping by! 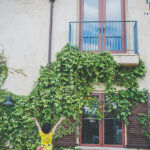 The Perfect Napa Itinerary for First Time Visitors: Best Things to do on a Weekend Trip 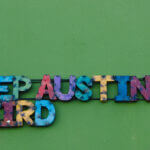 Three days in Austin, Texas-How to Plan for a Funfilled Austin Itinerary

WHAT TO WEAR IN SAN FRANCISCO? A...

The Best Things to do in Point...

Your posts definitely have the west coast calling to me! I love your photos and your descriptions of these fantastic places and I hope to be able to take a trip out there some day soon.

I don’t mind a climb for a great view and photo opportunities! That is a great place to watch sunsets. Mr. N would be zooming up and down those stairs like they’re nothing.

You have to make a trip to SF soon with Mr. N!

Matthew and I made sure to walk the Land End’s Traill after visiting the Legion of Honor museum. We didn’t head down to the beach, mainly because we didn’t have Bernie or Lizzie in our sad dogless ives yet, but we did somehow arrive at Cliff House right before sunset. We scored a table with a beautiful view of the sunset and enjoyed their delicious clam chowder. One of my happier memories from living briefly in San Francisco.

So glad to know you enjoyed your time in San Francisco. Do revisit with the doggies!

That beach is a photographer’s dream! I’d love to be out there to shoot, plus dog friendly? A dream spot. Love your shots. If I’m ever out there, I’m there for sure with my camera in hand!

Thanks so much Dorothy!

We’ve actually visited this one! We love the combination of the rocks, water, cool breeze and glorious sunset – all enjoyed with our fuzzy ones! Your pictures are absolutely reflective of the beauty in that area, and I particularly love the ones on the beach – doggos love to roam on the beach (and sometimes roll around in the wet sand….). I’m going to share your site with my girlfriend who just move to the area with her pup – your site will be a great resource for her (a Seattle transplant)!

Thanks So much Rebecca! Really appreciate this gesture!

I remember seeing the fog “rolling in” over the islands and the Golden Gate bridge when we took a dinner cruise. What surprised me was how cold it got the closer we got to the bridge. It was August and frost was forming on the windows. Such a beautiful location!

Beach, dogs hiking and a sunset? Sounds and looks like a perfect day to me. Will have to check it out next time I’m in the Bay Area.

I think I have being there, as well as other dog friendly beaches at SF area. It’s also the only place in the world where the summer is not terrible 🙂

Your pictures always transport me. Thank you! I love watching sunsets.

Loved this! I discovered Mile Rock recently and thought it was such a beautiful place! And I’ve always thought China Beach was such a hidden gem in the city.

I never even thought to try and find a beach when we were in San Francisco (a long time ago!) but I think we would if we headed there again. Some great practical advice on how to find these great places – thank you!

Some cool spots there! I haven’t spent that much time in San Fran yet, so I guess I’ll have to go back 😀